Gembloux, Aalst, Antwerp, Diegem and Huizingen, 4 November 2021 – The company LCL Data Centers has received ISO 14001, ISO 45001 and ISO 9001 certificates for its Gembloux data center in barely four months. LCL Wallonia One already had an ISO 27001 certificate – as LCL’s other data centers do too – for the international standard for managing information security. These new certificates confirm that all LCL data centers apply best practices according to international standards for environmental, safety and quality management.

LCL Data Centers has been aware for several years that reports and certification are important; that is still the case today. Thanks to a third-party and external evaluation by an independent organisation, LCL can now prove that its data centers meet the standards and requirements set by the market. These new certificates for ISO 14001, ISO 45001 and ISO 9001 awarded to LCL Wallonia One underline that the Gembloux data center (Namur Province) works in accordance with international standards for environmental, safety and quality management.

Laurens van Reijen, Managing Director of LCL Data Centers, said: “Certification is very important. It’s a key part of corporate governance, and certainly so for a data center. Put another way, these certifications that we receive also apply to our customers, whose ITC infrastructure is hosted in our data centers. This saves them from having to worry. LCL therefore attaches great importance to reassuring its customers, including through a wide range of services.”

LCL Wallonia One was certified for ISO 14001, ISO 45001 and ISO 9001 in the space of little more than four months. That’s very fast. This certification was awarded by an independent agency. LCL Wallonia One had already previously received the ISO 27001 certificate.

“BSI was able to certify our Gembloux data center in record time. This clearly shows that most of the right processes were already in place. We just had to objectively verify them, which means certifying them. We can now proudly say that our five data centers are fully certified,” noted Mieke Germonprez, Quality Manager at LCL.

The three certificates received are different from each other. With the ISO 14001 certificate, LCL proves that it attaches the highest importance to the environment and sustainability. In January 2021, LCL was among the initiators of the Climate Neutral Data Centre Pact (CNDCP), a self-regulatory initiative aiming to make all data centers in Europe climate-neutral by 2030. This measure was taken to support the European Green Deal. LCL has already committed, among other steps, to use green energy and to continuously monitor its electricity consumption to identify energy losses. LCL Wallonia One also owns a 1 MW solar park that produces energy.

The ISO 45001 certificate proves that LCL Wallonia One fully complies with the new international standard for managing occupational health and safety. LCL has always been strongly committed to safety in order to prevent work-related accidents, incidents and health problems. However, in recent years, the data centers company has stepped up efforts in this field.

Lastly, the ISO 9001 certificate proves that the LCL’s data center in Gembloux complies with international standards for quality management systems. This certificate is very much part of LCL’s customer intimacy strategy. “At LCL, we always aim for the highest quality. It’s important that we know our customers well and what their expectations are. So we regularly conduct surveys. This enables us to remain aware of their needs and to optimise our services to better meet those needs,” concluded Laurens van Reijen. 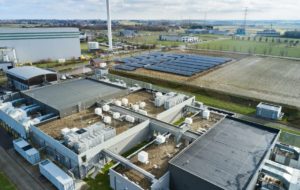 To the attention of editors:
For additional information or an interview, please contact Aurélie Decoster
at Luna by GSM on +32 495 59 38 00 or by e-mail at aurelie@luna.be.

LCL offers years of experience and know-how in the field of data centers and co-location. The company has five independent data centers: Aalst (LCL Brussels-West), Antwerp (LCL Antwerp), Diegem (LCL Brussels-North), Gembloux (LCL Wallonia One) and Huizingen (LCL Brussels-South). Thanks to the efforts of its dynamic team – the largest on the Belgian data centers market – and reputable service provision, LCL has grown over the years into a company that offers its services to customers active in many different sectors.

Multinationals, small and medium-sized companies, governments, internet companies and telecom operators all call on the services of LCL. Customers have the choice of more than 40 providers and the LCL Cloud Exchange for optimal connectivity. The company is Tier III certified and complies with ISO 27001, ISO 45001 and ISO 9001 standards. LCL also resolutely embraces sustainability and is ISO 14001 certified. In addition, LCL holds ISAE 3000 and ISAE 3402 type II reports. More information: https://www.lcl.be/en.

This website uses cookies to improve your experience while you navigate through the website. Out of these cookies, the cookies that are categorized as necessary are stored on your browser as they are essential for the working of basic functionalities of the website. We also use third-party cookies that help us analyze and understand how you use this website. These cookies will be stored in your browser only with your consent. You also have the option to opt-out of these cookies. But opting out of some of these cookies may have an effect on your browsing experience.
Necessary Always Enabled
Necessary cookies are absolutely essential for the website to function properly. This category only includes cookies that ensures basic functionalities and security features of the website. These cookies do not store any personal information.
Functional
Functional cookies help to perform certain functionalities, such as sharing the content of the website on social media platforms, collecting feedback and other third-party functions.
Analytics
Analytical cookies are used to understand how visitors interact with the website. These cookies provide information about statistics, number of visitors, bounce rate, traffic source, etc.
Save & Accept